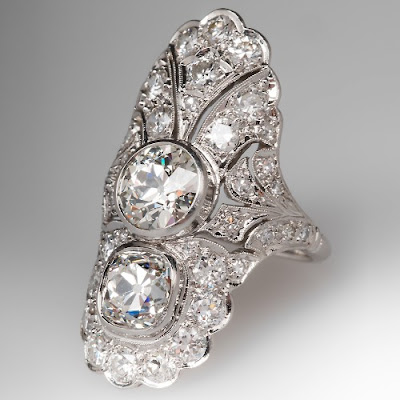 This authentic Art Deco north-south dinner ring dates from the 1920s and is absolutely breathtaking. It features two amazing fraternal twin diamonds weighing 2 carats or more. The larger of the two, a 2.16-carat old mine cut diamond, graded I in color and VS2 in clarity, is set bezel style right in the center of the ring. Set just below this stunner is a 2-carat pillow shaped diamond exploding with character. This stone is also bezel set, graded G in color and VS2 in clarity, and will take your breath away.

If these two sparklers are not enough to make you swoon, then consider the 2.39 carats of accent diamonds encrusting the gorgeous filigree openwork that comprises the remainder of this absolutely stunning ring. Care was taken with every last detail of this astonishing dinner ring set in platinum. All told, this delicate platinum setting showcases over 6.5 carats of crystal-clear white diamonds, making it the quintessential dinner ring.

Dinner rings made their debut during the height of Prohibition, along with flappers, speakeasies, and cocktail parties. With the ban of alcohol, drinking went undercover. Underground, dimly lit venues became the place for these illicit soirees, which called for a special kind of style. Short, sexy cocktail dresses adorned with shimmering sequins, dark red lipstick, sexy black Kohl eyeliner, and long red fingernails became the rage. Along with this look came the long cigarettes, cocktail glasses, and of course the ubiquitous cocktail ring.

These cocktail rings were glamorous, over-the-top creations that shimmered and sparkled in the dimly lit speakeasies. The bigger the better, as far as most were concerned. These rings were purchased, not by husbands or lovers, but by the liberated women themselves. They became a status symbol, a sign of independence and power. At first cocktail rings were styled much in the way the above ring was styled, mostly comprised of large diamonds surrounded by smaller but no less brilliant diamonds.

However, as times changed and Prohibition was lifted, these gorgeous cocktail rings gained a different sort of prominence. Beginning in the 1930s and carrying through into the 1950s and 1960s, cocktail parties turned into prominent dinners. Thus, the era of the Dinner Ring began.

Dinner rings continued to be large and glamorous, though diamonds began to play second fiddle to some of the most beautiful and tantalizing colored gemstones imaginable. Massive garnets, aquamarines, and citrines took center stage on the fingers of the wives of powerful leaders in business and politics.

These prominent dinners were high-class affairs, and women attended them on the arms of their husbands, lovers, or business partners. As women took a more prominent role in politics and business, they continued to assert themselves as independent agents of power. Thus, dinner rings continued to be brassy and bold. The bigger the better remained the motto.

Today, dinner rings have resumed their original appellation, cocktail rings. They are still worn to cocktail parties and fancy dinner parties. However, now they can also be seen on red carpets, at Hollywood after and premiere parties, and at weddings and other formal affairs. While it is true that women continue to purchase cocktail/dinner rings for themselves, they have lost a little of their distinction as a sign of female independence. It is now en vogue for a man to buy a cocktail ring for his lover.

In fact, a dinner ring of this distinction, with its pristine white diamonds and its antique design, would be the perfect anniversary gift for that woman you love. Why not come on in and view it in person? If this is not the one for your beautiful bride, then perhaps we can find another dinner ring to suit her?