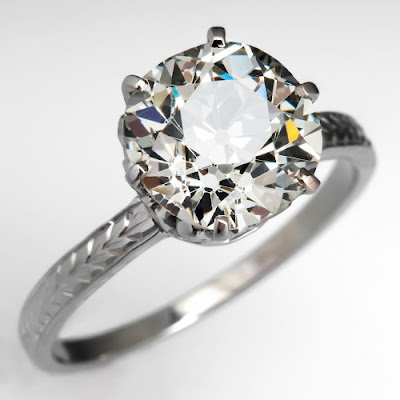 This magnificent 2.77-carat Old European cut diamond engagement ring is absolutely breathtaking. The solid 18k white gold shank is engraved with an elegant leaf motif. Tapering up toward the central diamond, the shoulders give way to a fancy crown head. The crown setting perfectly suits the majestic 2.77-carat diamond, graded L in color and VS1 in clarity, which rightfully takes center stage on this glorious Antique Old Euro Diamond Engagement Ring.

The crown setting is perfect for solitaire engagement rings. One of its primary purposes is to raise the central stone above the shoulders of the ring, allowing access to more light from nearly every angle. For this reason, it is often chosen by designers who wish to showcase a particularly fabulous diamond or gemstone. The crown setting is also preferred for solitaire stud earrings, as well.

Crown settings were used frequently in the nineteenth century, for the reasons already mentioned. The crown setting provided a departure from the previously popular bezel settings. The introduction of more sophisticated faceting techniques, and the accessibility of dramatic diamonds coming out of the Kimberley Mines in South Africa, led jewelers to experiment with ways to keep the diamonds safe without sacrificing access to light. Thus the crown setting was born.

The setting derives its name from its crown-like profile. Though their appearance is simple and classic, their function is far more involved. Beauty is essential, but even more essential is the security of the central diamond.

A jeweler's saw is used to form the crown shape from the metal. This crown is then incised to firmly hold the girdle of the diamond in place. Finally, the prongs, formed of durable metal such as white gold or platinum, are pushed into place over the crown of the diamond. The diamond is absolutely secure while at the same time exposed from nearly angle to every light source available.

Hands down, this gorgeous antique solitaire diamond ring is one of our most prized selections at this time. If you're in the market for a classic diamond solitaire mounted crown style, then may we entice you to come in and try this beautiful ring on? 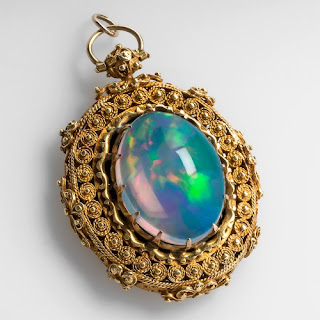 In my experience (which is primarily limited to movies, I'm afraid), Russians are serious and solemn, just as I would expect a Russian wedding to be. However, my research into the topic of Russian wedding customs tells a completely different story. In truth, a Russian wedding sounds like a treasure trove of fun, beauty, and joy.

A Russian wedding actually begins when the groom pays a visit to his bride-to-be's home. He is met there by a series of obstacles, set up by the bride's family and friends. The groom must pass a series of tests, and he must pay a ransom, often in cash or jewels, to those who stand between him and his bride.

Sometimes, a particularly feisty group will add an element of deception to the mix. After the groom pays for his bride, he will be escorted to a room where he sees a dressed and veiled beauty with her back to him. As he approaches, his "bride" will turn around. To his surprise a male cousin or elderly grandmother will be standing in stead for his bride, and he will have to pay yet again to make claim to his true bride.

After the fun and games are had, the couple pays a visit to ZAGS, the public services department where their marriage license is purchased and a brief civil ceremony takes place. This visit officially registers their relationship with the government, and is essential to the legalization of their marriage. Following their registration, the couple gets into a big black sedan with their closest friends and takes a tour of the most picturesque locations in their city.

This tour can last as long as three hours. Afterwards, if the couple has chosen to follow the civil ceremony with a religious one, the couple will arrive at the church. A Roman Orthodox ceremony is filled with candlelight, ritual, and ceremony. A full service is conducted, during which a service of espousal is added.

From the church, the couple is once again conducted in a big black car to the reception hall. Here a toastmaster (possibly a friend, but often a hired professional) begins the reception with a toast. Glasses are raised, and the wine is sipped. At this point a number of guests will shout "Gor'ko!" (Bitter!).

Meanwhile, the toastmaster is responsible for keeping the mood light and fun. He/she will tell jokes, read poetry, tell embarrassing stories about the couple, and possibly even break out into song. His/her job is to keep the guests in high spirits and make sure that the mood never falls flat.

After the toasting period, which can last an hour or more, the dancing begins. The bride and groom dance the first dance, and after this the toastmaster is able to take a breath and relax. The entertainment is now at the mercy of the dancers and revelers.

Throughout the night, the groom will want to keep close watch on his bride. He must also keep a fair number of coins in his pockets. For if he does step away, his bride might be stolen. And if she is stolen, he will once again have to pay a ransom to get her back. This could happen all night long, so it might be wise to find a bathroom where the bride and groom can go off together to relieve themselves. This way, the groom will get to keep his coins and his bride for the duration of the night!

A huge feast is served after the dancing. After the feast, the guests go home and get some rest, for the party will resume the following day. On the second day another smaller feast is prepared, typically borsch or ukha. Not only are these delicious and comforting dishes, but they can also help relieve any hangovers from the night before.

The second day is far less formal, though toasts and cries of Gor'ko! can be heard throughout the festivities. After the meal, the bride must clean the floor in the room. Here is an opportunity for the bride and groom to recoup some of their paid ransoms from the night before. The guests are allowed, even expected, to mess the floor up so the bride must continue cleaning. The one rule: The guests must muss the floor with coins or banknotes. She is literally cashing in as she cleans!

Guests may also stage several other fun ways to help the couple financially, including lotteries, auctions, and other money-making schemes that keep the guests entertained and the money flowing freely toward the newlyweds. It remains the job of the witnesses (maids of honor and groomsmen) to ensure a fun and entertaining time for all. Drinking is essential, as the fun is only had when true drunkenness sets in.

After a wedding like this, their pockets lined with coins and cash, the newlywed couple will proceed on their honeymoon, or even just to their new home, alone and exhausted. But filled with joy and love and the goodwill of all those who know and love them.

Doesn't it sound far more fun and exciting than the solemn picture I had painted in my mind?

Perhaps a Russian wedding is in your future. If so, would you let us know which of these traditions you are most looking forward to experiencing as a bride or groom?