Are You An Op Art Bride? 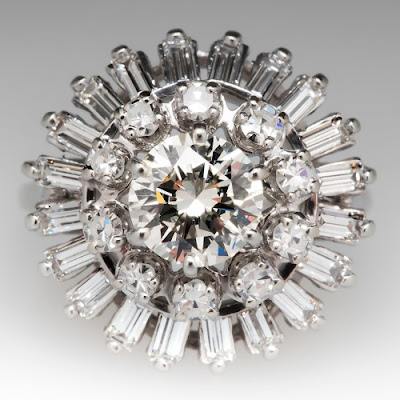 What is Op Art?
Optical Art is precise and fascinating, sensory and psychological, jarring and enlightening. It emerged out of the modern art movement during the early 1950s. At first linked with kinetic art, the movement was launched with an exhibition called Le Mouvement in 1955 at Galerie Denise Rene.{1}

Both the kinesthetic and the Op Art movements were drawn to motion, with the kinesthetics harnessing physical/mechanical motion and the op artists experimenting with virtual/perceived motion. In a short time, the Op Artists began to establish their own platform on which to stand, reaching their peak with The Responsive Eye, a 1965 exhibition at the Museum of Modern Art. There, Victor Vasarely, Bridge Riley, Frank Stella, Carlos Cruz-Diez, Jesus-Rafael Soto, and Josef Albers, finally caught the attention of the world, and of the critics, of course.{2}

While the critics balked at what they perceived as gimmicks and tricks, the public flocked to the exhibit, drawn by the wonder and magic of illusions and afterimages. Unfortunately, the critics were unable to welcome Op Art into their circles, so the movement faded shortly after the exhibition at the Museum of Modern Art ended. Though a blip on the broader screen of world art history, Optical Art continues to prevail as a movement in its own right, inspiring even today's most accomplished fashion designers.

Op Art Philosophy
When considering whether Op Art is your bridal style, you will first want to know what Op Art artists set out to explore and demonstrate in their work.

Op Artists were keenly invested in the exploration of perception, particularly of how the eye sees and responds to abstract geometrical forms and patterns.{3, 4} As a subset of the Modern Art movement, Op Art took many of its cues from the latest advances in technology while eschewing the common practice of referencing the past or recognizable shapes and forms.

Decidedly abstract yet carefully constructed with a foundation in mathematical and scientific principles, Op Art was the first art movement to marry art and science together intentionally.{5, 6} Op Artists set out to provoke immediate psychological and visual responses from their viewers. It was expected that this immersive perceptual experience would jar the viewer into recognizing the confounding nature of the human eye and its relationship with the brain and visual stimuli.

It was hoped that some of these viewers would realize that to some degree everything is relative to how we see what we see. While some people see movement in an image, others see static lines and patterns. While to some the color blue appears greenish, to others the same shade might appear to have violet undertones.{7}

Characteristics of Op Art
To achieve their ends, Op Artists employed a variety of forms to a number of basic principles. First, Op Artists focused on geometrical patterns and forms. While many of them kept their color palettes limited to black and white, some used color to enhance the visual responses of their viewers. More often than not, though, color was meant to further shock viewers by behaving outside of the norms typically associated with a particular hue.

Op Artists intended to evoke strong perceptual experiences in their viewers. To achieve this end they employed illusions, after effects, abstractions, and visual trickery.{8} Symmetry and mathematical precision was essential to the compositions, as well.{9, 10}

Are You an Op Art Bride?

Do you enjoy stark color contrasts and limited color palettes?


Are you fascinated by movement and illusion?

Are you precise and scientific in your approach to life?

Do you enjoy wonder and mystery of magic and optical illusions?

Do you want your wedding guests to walk away in wonder and awe?

If you said yes to any of these questions, then you might be an Op Art Bride.

An Op Art Bride Might:
An Op Art Engagement Ring

An Op Art bride will choose an engagement ring that confounds the eye. Perhaps it will have alternating rings of geometric patterns, like the above vintage diamond cocktail ring. This ring features concentric circles of white diamonds surrounding a single 1.22-carat round brilliant diamond. The inner circle is composed of smaller round diamonds, and the outer circle is composed of baguette diamonds. The effect is mesmerizing and somewhat disorienting.

Rings with multiple halos are another fabulous option for the Op Art bride. You might also consider choosing from the vast geometrical styles of the Art Deco period. Or you could choose a piece by Isharya, whose Op Art rings are fantastically rendered in yellow gold with white and black enameling.

If The Style Fits
So, does the Op Art label fit you? If so, here are a list of other considerations to make as you plan for your big day:

Posted by Angela Magnotti Andrews at 10:55 AM