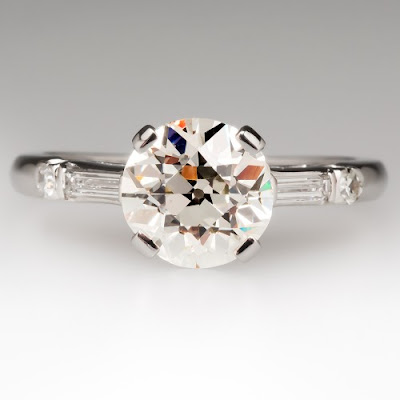 Prior to late 2013, this cut did not have parameters associated with it. Circular Brilliant Cut stones would have been labeled as transitional, and if graded by the GIA on the Cut Scale, would have received a "Fair" or even a "Poor" grade.{1}

Under pressure from dealers who felt these antique stones were being "judged by standards that they were never fashioned to meet," the GIA agreed to create a new category, which they named the Circular Brilliant Cut.{2}

The parameters for a diamond to qualify for this new cut grade are as follows (adapted from Duncan Pay's article dated December 20, 2013 on the GIA blog):


All three requirements must be met for a diamond to qualify.

As a comparison, Old European Cut diamonds, which are also eligible for a cut grade on a GIA grading report, must meet the following criteria (adapted from the same article in 2013):
Before the advent of the new Circular Brilliant Cut, a diamond which fell outside the parameters for an Old European or Old Mine cut, were compared, typically unfavorably, against the parameters of a Modern Round Brilliant Cut. These parameters are as follows{3}:
Perhaps you have or plan to purchase a transitional cut diamond that has been previously graded (prior to 2013) as 'poor' or 'fair', or which does not have a cut grade listed on your GIA report. If that is the case, may we recommend contacting the GIA to inquire as to whether your stone might qualify for a reevaluation according to these fairly new Circular Brilliant Cut guidelines?