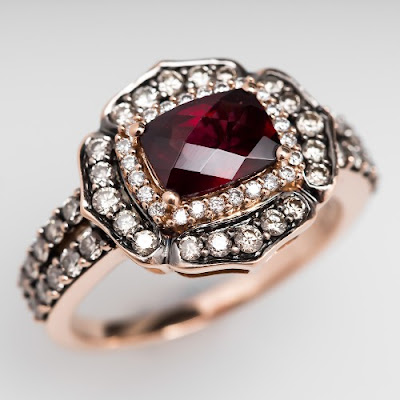 Ruby red garnets resemble the jeweled interior of a pomegranate. Glistening red seeds cling to each other in the most intricate patterns. These seeds are encased in deep red and cut through on the inside by creamy flesh. Pomegranates through the ages have represented abundance, fertility, and passion. Their rich color and textures evoke the essence of all things rich and beautiful.

It is from these delectable fruits that some experts believe garnets derived their name. The word 'pomegranate' contains the root 'granate'. The Medieval Latin word 'granatum' means 'dark red', and it is believed that 'garnet' is a modification of this root word meaning deep, dark red.{1} While not all garnets are red, the richly colored varieties have been the most popular throughout the ages.

Like their namesake fruits, red garnets are associated with passion, life force, and love. They have also been closely connected to travelers, providing both protection and visibility. Some believe that Noah, the famous boat builder of old, navigated at night by the light of a garnet-powered lantern.{2} We know today that in and of themselves, garnets do not emit light. Rather, they harness and release it in the same way that rubies and other luminous gemstones do.

Garnets are closely associated with rubies, as well, often being found in the same vicinity as corundum. During the 15th and 16th centuries, garnets were often confused with rubies and other red gemstones found in similar areas, like spinels. Pliny the Elder, one of the first Europeans to categorically describe gemstones and minerals, lumped most red gemstones into the category he called carbunculus. Each red carbuncle was given a characteristic- and location-specific name by various historians, often relating to the burning or smoldering item its color suggested. For example, Greeks called all bright red stones 'pyropus' because "they appear to be burning."{3}

Garnets have been found in Burma in the ancient village called Syrian during the infamous reign of the great kings of Pegu. Here they were discovered interspersed with their cousins, spinels and rubies. Garnets are also found in Ceylon (Sri Lanka) and Bohemia (Czech Republic).

Czech garnets are "small but beautiful stones."{4} Czech jewelers set these rich red stones in tightly cloistered settings so that they resemble a pomegranate. According to Dr. Simeon Shaw, writing in 1823, the most celebrated garnets were those that hail from Burma. In particular, those that were cherry red and pinkish-violet. Today, it seems the most popular are the deep, deep blood reds which are favored the most by Steampunk and Goth Rocker brides.